My entries on this blog have been few and far between in recent times. There have been a variety of reasons, but thankfully, none concern any personal difficulties. For those who have checked by and seen nothing new, I sincerely apologize, and I am truly grateful for your interest. I SHALL endeavor to be better about posting in the future.
This past weekend was been quite active. Holly and I were greatly pleasured that our humble abode served as a meeting point for a few friends, all of whom are bloggers. We crammed a lot of activity, eating, and socializing into a relatively short time. Since most of this has already been mentioned by the others, let me refer you to the blog entries by Holly, Bayou Renaissance Man, Phlegmfatale, and LawDog.
It is axiomatic that every blogger has something to say, else he/she wouldn't start out doing it. Well, if ever there was ANY doubt of this, it would have been proven by our happy little band. I believe the five of us could visit, cuss and discuss stuff – almost ANY KIND of stuff-- for a solid week, and not short of input. It is stimulating to get another thinking person's take on practically ANY topic worthy of consideration. And this group was nothing if not thinkers – and talkers. Many would think it ridiculous discuss military history -- strategic, tactical, and individual – in combination with religion, philosophy, the social “sciences,” and precious metals, all linked together within five minutes. Well, we did it, with all of us participating and enjoying the interchange.
Following the activities of Saturday, Phlegmmy felt she had to go home, perhaps a bit late o' the clock, but all too early because fun was still being had. Peter, the 'Dog, Holly and I sacked out soon thereafter.
Holly and I overslept a bit Sunday morning and had to rush around, getting ready for travel to a family reunion a couple of hours south. Last year, Holly was roped into being an officer in the reunion organizing group. This is “above and beyond,” considering she married into the family only a few years ago. Anyhow, she had invested a lot of preparation and mental effort into the job, our having house guests aside. It all went quite well, and we were back home shortly before six p.m.
One sidebar point about the reunion: A seldom-seen cousin wanted some input from me concerning her purchase of a handgun. She had done a lot of research already, seeking out information about different defense guns, looking up others on the 'net, and had gone to a local range and tried out several different sidearms. She had narrowed it down to either of two Smith & Wessons, 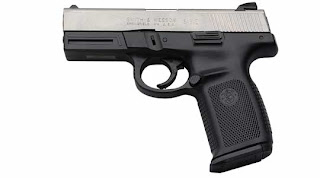 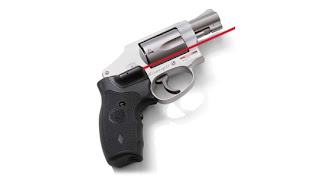 and a model 642 revolver with Crimson Trace stocks.
I asked if she intended to carry it on her person or in her purse and she said she preferred the former. So, my advice was simply confirmation of what she'd already decided. She'll get the Airweight five-shooter and practice with it. I said I'd loan her a Glock or something, so she could do her CHL qualification with a semi-automatic handgun. I said to phone any time I could help her out. Looking around the eighty-odd relatives present – maybe 65 adults -- I knew of four pistols for certain, and probably another eight or ten in the parking lot. I am truly gratified when intelligent, solid and upright individuals make an objective decision NOT to be victims of violence.
Back at home, we found that Peter and LawDog had enjoyed the day with some local sightseeing and being adored by our four-legged dogs. The 'Dog had gone home a while before, but Peter stayed over and we again talked past midnight. He left around noon Monday. A good visit was had by all.
JPG
Posted by JPG at 4:18 PM 9 comments:

In extraordinary acts of selflessness, two women worthy of great respect have gotten out front with some mental health issues. I really believe they will be the mechanism that influences some people running on the ragged edge to go and seek help.

Crystal, who writes a very worthwhile and amusing blog not only had some issues and the good sense to find help. She also blogs and tells us about it, first here and then here.

Unfortunately, Crystal was subjected to some stupid and insensitive comments. It is great to see the outpouring of support for, though. MattG stepped up on his own blog and eloquently put the matter into perspective.

Hard on the heels of Matt's remarks, my own Beloved Bride wrote another excellent piece in support of Crystal. Hers was not in the abstract or academic sense. She has some first hand experience with the topic.

Now, I'll note that it takes a lot of concern and dedication for Crystal and H. to put their personal accounts out in public. It is wonderful how the readers have made sympathetic and supportive comments. Well, ALMOST all have been supportive.

In the spirit of conciliation and brotherhood, I'd like to extend my personal greetings to the main insensitive critic of Crystal's blog. I have my personal feelings and you have your own. {cue violins} There's room in this world for differences of opinion. I realize how easy it must be to hide behind the anonymity of the internet, using some cute name. And why SHOULD you expose yourself to the vitriol of those who blindly support our friends and others who've never done US any harm? No, I'd like to give you the opportunity to engage in sport with me the first time you're in North Texas. I'd be quite happy to take you out to a private shooting range and we can have our own head to head contest. You may bring your own pistols or I'd be happy to loan you mine.

And by way of benediction, Anonymous: Take with you our richly deserved accolades, and then go ye therefore hence and have intercourse with thineownself, not forgetting to share this activity with the noble steed upon which you arrived. 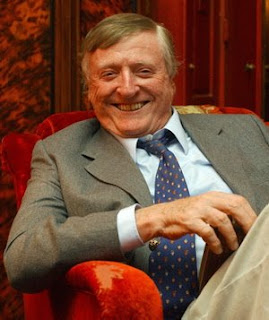 William F. Buckley, Jr., died last week. Author and dyed-in-the-wool conservative, he shaped and defined much of American conservative feeling for over a half-century. He founded National Review magazine in 1955 and hosted Firing Line TV show, 1966 to 1999. Political historian George H. Nash wrote that Buckley was "arguably the most important public intellectual in the United States in the past half century, . . . . For an entire generation he was the preeminent voice of American conservatism.” Buckley's twice-weekly column was syndicated in some 320 newspapers. Highly controversial and penetrating at times, even his political enemies considered Buckley “a class act.”
Buckley wrote over 50 books, including a series of spy novels. These probably drew upon his limited service as a CIA agent, 1950 –51.
This morning, the TV program Meet the Press did an informative retrospective on Buckley's life, including a lot of clips from earlier appearances on that show. No stranger to snarkiness, Buckley was depicted as especially critical of a series of US Presidents. I had always considered Buckley fairly interesting, but more than a little pompous. Even so, I think it was unfortunate when the Meet the Press producers played part of an old interview in which Buckley pronounced, “I think the average American is a little above average.”
Our country and the world are the poorer for the passing of such an articulate and acerbic Conservative commentator.