On 9AUG2009, I received an e-mail from a friend which was, on the face of it, very alarming. It started out:

Concerning the Blair-Holt proposed legislation: Senate Bill SB-2099 will require us to put on our 2009 1040 federal tax form all guns that you have or own. It may require fingerprints and a tax of $50 per gun.

In November, our lying president promised he was not going after our Second Amendment rights. This bill was introduced on Feb. 24. This bill will become public knowledge 30 days after it is voted into law. This is an amendment to the Internal Revenue Act of 1986. This means that the Finance Committee can pass this without the Senate voting on it at all.

The e-mail continued with a broad expansion of this horror story, detailing provisions of the "New Law," including:
. . . would make it illegal to own a firearm - any rifle with a clip or ANY pistol unless:
It is registered, owner is fingerprinted, supplies current Driver's License and Social Security Number, submits to physical & mental evaluation at a time of "THEIR" choosing. Any change of ownership through private or public sale must be reported, with a $25 fee. Failure to do so automatically forfeits the right to own a firearm and subjects you to a year in jail. A child-access provision allows "THEM" to inspect your gun storage, and violations subject you to fine and up to 5 years in prison.

I do not question the sincerity of my pal who sent the e-mail. I'm certain he got it from someone who was equally convinced on its authenticity. HOWEVER - - -
My very well-informed friend Stephen Camp passed along the following:

Mr. Cox sets the record straight and reveals that, "It turns out someone’s recycling an old alert that wasn’t even accurate when it was new. There actually was a bill called S. 2099 that would have taxed handguns--nine years ago."

Please check out the above link and read the entire article. It places "Rumor Control" in an interesting historical context, and is a true cautionary tale. We ALL must be alert for abuses of our rights, but it is important that we cast a critical eye on the more fantastic rumors.
Posted by JPG at 8:40 AM 2 comments:

Push the Pull Door - - Blog by a Great Guy

By way of Elder Son's writings, I learn that friend Don Gwinn's old blog, Armed School Teacher, is no more. If you have that site bookmarked and click on the old link, you'll find the entire site has been taken down. I'm happy to pass along that Don's fine efforts may now be found at Push the Pull Door. If you haven't read Don in the past, do yourself a favor and check him out.

First, though, read Matt's blog on the topic. Be sure to click on that first link, I've written, for an excellent introduction to a truly fine man, his family, and his other, subordinate, interests. I've "known" Don for about nine years, both of us serving on the staff of both The Firing Line and The High Road firearms interest boards. Though we've never met face-to-face, I believe you can learn A LOT about a man, reading several thousand examples of his writing.

It may seem a little strange for a senior citizen (memyownself) to write about one of his heroes who happens to be considedrably younger. Well, that doesn't bother me one bit to echo Matt and say: Don Gwinn is indeed a hero, and I'm pround to call him a friend.
Posted by JPG at 10:35 PM No comments:

Pistols Too Tight to Use

Over at Better and Better blog, Elder Son writes of handling a fine Les Baer Thunder Ranch Special .45 pistol which was set up too tight to even field strip. That particular pistol currently lists at $1990 - - Really not TOO out of line for a high-grade "premium name brand" .45. Matt was a bit miffed to find he couldn't readily disassemble it. 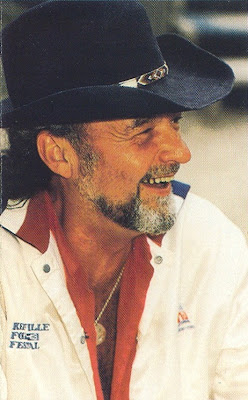 Only a year or so before friend Allen Damron died, his bride gave him an Ed Brown .45 for his birthday. Holly and I were visiting in Terlingua and Allen insisted that I shoot his new pistol. I'm pretty sure it was the E-SS Executive Elite model, which today lists for $2395.
We went over to Art Eatman's range and put up a target. I handled the new pistol with the reverence due such a fine piece of ordnance, admiring the fine finish and fitting. Before I could shoot, though, I was distressed that it was difficult to load the pistol. It was so tight that I couldn't unlock the action without striking the muzzle against something solid. I kept looking to see if I hadn't locked the safety. Once I finally got it loaded, though, the pistol shot very well. I was suitably impressed that, at 20 yards, even I was able to shoot a couple of rather tight groups. 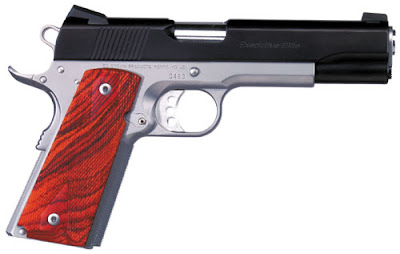 While reloading magazines, I mentioned to Allen that he probably wouldn't be carrying it until it loosened up a lot. He said he'd been cautioned that, "it'll take a couple of hundred rounds to loosen up and break in." He said he'd only shot a hundred or so and he actually wanted my help, breaking it in. Unfortunately, the only .45 ACP ammo I'd brought on this trip was in my loaded Commander plus two spare magazines. I had come prepared to shoot rifles and a couple of revolvers. We had less than 100 .45 cartridges that day. Once these were gone, the pistol didn't seem much looser. I had no bushing wrench with me, and Allen had left his at the house. Now, I can usually manage to take down a .45 by using a magazine lip to depress the recoil spring plug, but that didn't work with this one. I just flat couldn't disassemble the pistol for proper cleaning that day.
Now, Allen had other handguns to use for carry and for home security, so it's not as if this Ed Brown was the only one he had for self defense. It was a little daunting, though, to contemplate that this pistol, a high grade 1911 clone, touted as one of the very best combat pistols available, just wouldn't serve for the purpose. At the rate it was going, it would have taken at least another 300 -- 400 rounds, or the ministrations of a gunsmith, to make it carry-worthy. And, at current ammunition prices, ten or a dozen boxes of factory ammunition can be a bit spendy.
For those who want to shoot tiny little groups on the range at the club, this sort of thing may well be acceptable, and I have no argument with them. For the person who wants a service-type pistol for personal defense, for a law enforcement sidearm, or other serious use, the necessity of a concerted effort to loosen it up might well be a little discouraging.
In fairness, I should add that this was my one and only personal experience with a new or near-new Ed Brown pistol. The one other I've shot was a well-used specimen, which operated flawlessly. Come to think of it, though, I didn't clean that one, either.
Posted by JPG at 11:32 PM 2 comments: