LIGHTS OUT. Minor Glitch or Something Sinister?

You're sitting home, reading or peacefully watching TV, and the power goes off. Oh, well, it happens, huh? I know, occasional interruptions in utility service DO occur. No reason to get excited, right?

Well, here lately, I'm no longer so sure. Since I retired from Peace Officering a few years back, I pay less attention to crime reporting thah I used to. But reports of home invasion robberies have been catching my eye recently. Just the other night, one of the 10 o'clock TV news shows pointed out some common factors in a lengthy series of violent home invasions. Not near all, but a growing number of these offenses entail the robbers cutting power and telephone lines before entering the residences.

I'm not writing about "several" or "a series of" incidents. I did an on-line search, and I find dozens, and perhaps hundreds, of such incidents in this area in the past several months. Part of the trouble keeping track is that the local metropolitan area is comprised of dozens of independent municipalities. News stories are usually reported with a specific reference to the particular town or city in which they took place. Yes, the area-wide chamber of commerce and certain governmental agencies lump population and business surveys together into "Metro Fort Worth," or "Greater Dallas," or better still, the "DFW Metroplex." which comprises all of Tarrant and Dallas counties, and some or all of the ten adjacent, or nearly so, counties. The US Gov't 2007 population estimate of this 'Plex is some 6.7 million.

"Well," you may say, "that's a lot of people, and there's bound to be more crime in such an area." Maybe, but there's also the idea that while such a populace gives rise to more violent criminals, it also provides a very fertile hunting ground for however many there are. It also means that a given gang of thugs, usually three to six, need only drive for fifteen minutes to be in an entirely different jurisdiction. Police communications are much better than they were when I was a rookie cop, but it still takes time for bulletins to be circulated.

Enough of this demographics stuff. Let's return to the action.

This line-cutting strategy stuff makes sense. If a house occupant hears someone breaking in, the first impulse for most is to call 9-1-1 for police assistance. And, if the lights are off, there will be a certain amount of disorientation, moving around in the dark.

A robbery crew making a dynamic entry, sometimes equipped with head lights and/or weapon-mounted lights, and totally prepared for the situation they created, will have the upper hand. They have often gathered intelligence about the targeted residence, knowing the number of occupants and possibly their placement in the household.

You might think that well-informed robbers would limit their incursions to affluent families in well-to-do neighborhoods. It seems, though, that fully as many home invasions take place in middle-class areas, and even in very modest surroundings. Many of the TV news tapes depict mobile home parks and lower income apartment buildings as their settings.

It may be an over-simplification, but I can see at least a partial means of dealing with this epidemic of violence. It may not work for everyone, but Beloved Bride and I have discussed it, and here's my personal plan. The instant the lights go out, TASK ONE is to get hold of a firearm. This will be done before looking out the window to see if the power outage is neighborhood-wide, or much more limited. Second, firearm, flashlight, and cell phone are taken to our "keep" area. Use of lights will be kept to a minimum. We keep a careful listening watch for what the dogs do. THEN, we'll check to see if this is happenstance or evil design.

There. As simple as that. Our plan impinges on no one else. No non-guilty person is endangered in any way. If the power outage turns out to be innocent, no one need even know of the preventive measures we took.

And what will BB and I do if a home invasion DOES ensue? Well, we have a couple of plans for THAT, too. What works for us might not work for you. But I really believe that everything up to this point WILL work for anyone at all. It's strictly up to you, whether or not you choose to plan it out ahead of time.

Today is the anniversary of the Battle of San Jacinto. It was a skirmish of rather short duration, but it turned out to be one of the major events in the development of the United States as we know it today. 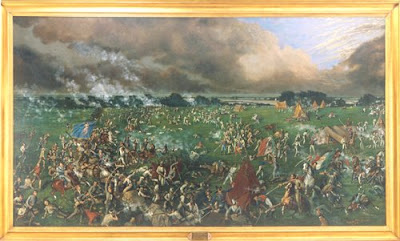 I've written of this battle on a couple of prior occasions. I've thought to revise it somewhat for this year, but I really can't come up with anything significantly better than what I wrote a year ago. If you're at all interested in Texas history, or in the United States' Manifest Destiny, you might want to take a look.

My Beloved Bride shares my affection for the history of Our Part of the World, and she often makes mention on her blog about landmark dates and events. Her installment for this year is rather short, referencing her 2008 blog entry, which was one of her best. In it, she mentions school field trips to The Battlefield, and the still-stunning monument. 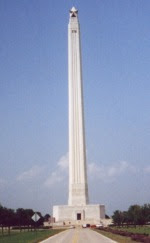