Like most shooters over a certain age, I started out handloading on a single-stage C-type press. I later got a stronger and nicer RCBS O-frame press and used it for many years. I loaded several handgun and a couple of rifle calibers on it. I shot a LOT of pistol ammo, especially for the several years when I was quite active in IPSC competition. I shot at least three, usually five or six, and sometimes seven or eight matches per month. This included the weekly Friday evening matches at Dallas Indoor Pistol Range. Believe me, I spent a great deal of time at the loading bench. I gave up casting my own, purchasing 230 gr. lead round nose in bulk. All that was on the same single-station press.
Finally, in 1989 or -90, I broke down and ordered a Dillon 550B, and it was a revelation! Though I had dropped back to shooting maybe one or two matches per month, it was glorious to spend a relatively short time loading, and yet be able to shoot all the ammo I wanted to, on any given weekend. This was a time when Elder Son Matt was getting very interested in center fire handguns, and we spent a lot of time at the range. The old RCBS press still saw a lot of service in rifle load development and loading practice ammo. 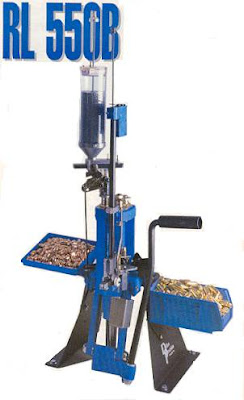 As great as it was having the Dillon press, I found myself dreading a change of calibers. It's only about two minutes to switch out one previously-adjusted tool head and to install another. I had some four powder measures, so I usually didn't even need to make load adjustments. About two minutes, that is, IF the switch was between two calibers using the same primer size. .45 ACP to .44 magnum or .45 Colt was a snap. Or .38 Special to 9mm or .380. But a changeover from small primers to large, or vice-versa, was a minor headache. I'd end up postponing loading some calibers until I was just flat OUT of that particular number.
A local shop took a used Dillon Square Deal B press in trade, set up for .38 Special. I looked it over, got a good price on it, and it was mine. I shipped it to Dillon for a complete overhaul at a reasonable cost, and now I had two progressive presses on my bench, along with the old single-stage. Matt and I owned small assortment of .38 and .357 caliber revolvers, and we began exercising these sometimes neglected fine old handgus. Most of the time, the 550B stayed set up for .45 ACP.
Couple of matters brought things to a head. First, my Beloved Bride had become very interested in shooting steel plate matches. She shot in the rimfire class, using my Browning Buckmark. Predictably, though, about the time she was becoming pretty competent with the .22, she wanted to shoot centerfire. Before I knew what was up, MY Browning 9mm Hi-Power took up residence in HER shooting bag, and when I wasn't prompt enough in changing my 550B over to small primer use, we were spending a fair chunk of change buying Winchester White Box 9mm at Wally World.
Also, this excellent spouse overheard me telling a pal that I seriously wanted a Colt Super .38 pistol. Next thing I know, she's shopping the stores and the internet, looking to buy me that special pistol. Long story short, she outbid all comers for a really nice 1953-vntage pistol. It was my birthday gift, and words cannot express how happy she made me with it. I bought several boxes of ammo, but already knew I needed to handload Super .38. Yet another reason to do primer system switches.
I finally put up a "Want to Buy" ad on TheFiringLine.com and TheHighRoad.com. A man who lived 15 minutes from me answered. I bought an old 550 in good shape, with three caliber conversions from him. It took me a few months to obtain a proper mounting plate for my bench, and more months before I got it set up.
I only then realized that the recent acquisition was a much older press, a 550 rather than 550B. 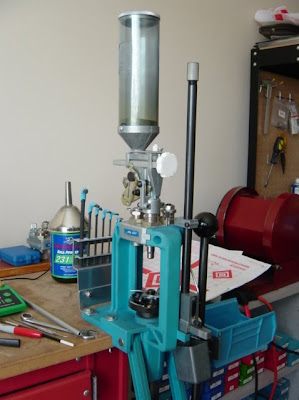 It had no fail safe powder measure reset rod - - Not even a place to mount one. And all three powder measures had a very different bell crank system. They should work out well with the older press, though. I've set up this press to handle all my small primer needs, so I can leave the other one for large primers. I've loaded almost 200 rounds of 9mm parabellum, which will make my beloved bride happy. Several hundred more, to establish a comfortable stockpile, and I'll continue my development of a couple of Super .38 loads.
So - I'm satisfied, at least for the time being. Two 550s, a Square Deal B, and an RCBS Single Stage. Things are getting a little crowded, but I'll deal with it.
Note: People I know and respect use other brands of progressive loading presses. I got started on the Dillon progressives and ave been quite satisfied with them. I have NO argument with loaders who choose another brand.
Posted by JPG at 11:54 PM 8 comments: