By 1 March 1836, the siege of the small Texian force at the Alamo was well under way. Travis had sent out his famous “Victory or Death” message on 24 February.

The first state government of Texas was the so-called "Permanent Council,“ organized at San Felipe in October 1935. They wanted to do little, and actually accomplished less still. They elected a temporary president, established a plan for a postal system, commissioned some privateers to control the Mexican Navy on the Gulf of Mexico, and authorized a representative to go (try to) borrow $100,000 in the United States. They then dissolved on 3 November, due to the convening of a general consultation.
The first order of business was to quibble over the nature of the brewing war and how to conduct it. The main issue was, were the Anglo-Texans ready to fight in defense of their rights as Mexican citizens under the Constitution of 1824, or to become independent from a corrupt Mexico?
This general consultation created the provisional government, with Henry Smith as Governor. San Houston of Tennessee was appointed Commander in chief of the army, such as it was, but had no funds to pay for an army. Little else of note was accomplished by the time the consultation was adjourned on 14 November.
The Provisional Government met in early January 1836 and debated endlessly about goals, ways and means, and who would be responsible for what. Unable to raise a quorum with authority to do anything definitive, the government, in effect, dissolved in chaos.
In the meanwhile, certain elements of the fledgling Texas Army were in the field. Governor Smith told Houston to try to organize the forces at Goliad. At the same time, Smith sent Buck Travis to Bexar to assist Colonel Neill in command of the Alamo. It was not known that Santa Anna was already on his way with the main force of the Mexican Army to subdue the rebellious Texians once and for all.
We have seen how matters progressed at Bexar. Travis and Bowie as co-commanders prepared the Alamo for an eventual fight, while Neill departed on family business in mid-February. On 23 February, the Mexican Army arrived at Bexar, and it became clear just how tenuous the Texian position really was.

In the meantime, the Convention of 1836 was held at Washington-on-the-Brazos. Fifty delegates, representing every settlement in Texas, had been elected on 1 February. Discussions, plans, and coalitions were undoubtedly started immediately thereafter. The convention opened on 1 March, with news of the situation at the Alamo waiting for them. Many delegates wanted to immediately recess or adjourn and march en mass to lift the siege. 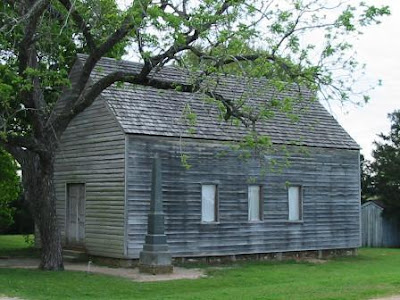 George Childress led a committee to draft a Declaration of Independence. A draft was submitted the very next day, making it clear that Childress had been at work on the document well before arriving at the convention. It was largely based upon the writings of Thomas Jefferson and John Locke, and much of the language may be seen to draw from the United States Declaration of Independence. The declaration was immediately adopted with no debate at all. Thereby, on 2 March 1836, the Republic of Texas was established. 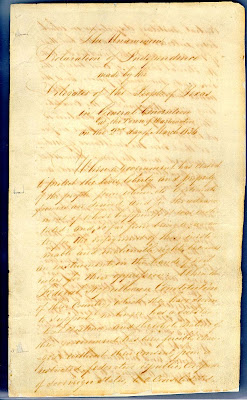 Convention delegates at once set about drawing up a Constitution. Early on 6 March, Travis’s final appeal for aid, dated 3 March, arrived. Again, sentiment was for closing down the convention to march to the Alamo. Houston convinced them to continue work on the constitution, while he rushed to Gonzales to assume command of volunteers gathering there. Soon after his arrival, word arrived that the Alamo had fallen and that Santa Anna would again be on the move.
Word traveled to Washington-on-the Brazos that the Alamo defenders were no more. It became clear in due course, though, that the delay of Santa Anna there had given this vital breathing space to the Convention. Texas was now an independent republic and had a constitution in place. Shaky as it would be, a new nation was now a fact. Six weeks later, on the boggy ground of the San Jacinto plain, Texas would become a world power. The way was now paved for the alliance of Texas with the United States, and in a startlingly short time, the USA would sprawl clear across North America.
Posted by JPG at 1:01 PM 2 comments: