There is a great deal of controversy concerning President Bush’s commutation of the prison sentences of former Border Patrol Agents Ignacio Ramos and Jose Alonso Compean, convicted of shooting a Mexican drug runner in 2005. 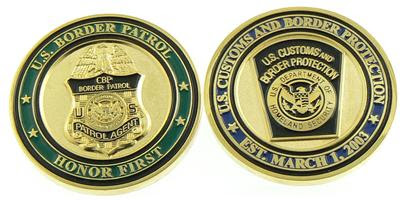 There are, indeed, two different sides to this story. Many think it was a miscarriage of justice to charge the BP agents to begin with. They are scandalized that the agents were prosecuted for shooting --and not even killing-- a dope smuggler. This faction --and a huge faction it is-- think that President Bush should have totally pardoned both agents. The other side is gladdened that there has at least been an attempt to apply to federal officers a similar standard of justice to that applied to private individuals. It is clear, though, that the 11 and 12-year sentences were far heavier than some given in arguably more serious convictions. That side decries any reduction of the sentences.

It did not reduce the controversy about the case that the incident and trial took place during the height of the “illegal immigration” and “porous borders” furor. Many tried to make out that the USPB agents, instead of interdicting drug smuggling, were actually doing God’s Work in stemming illegal immigration.

It might be useful to attempt to examine some of the facts of this matter.

17FEB2005, USBP Agents Ramos and Compean, on patrol SE of El Paso, stopped Osvaldo Aldrete Davila for illegal border crossing. The van he was driving was found to contain 743 pounds of marihuana. Aldrete Davila ran from Compean, who testified that he thought the suspect had a gun. Compean fired at Aldrete Davila but missed. Ramos testified that he had been out of sight of the two, heard the shot, and thinking his partner was under attack, also fired at the suspect, striking him in the buttocks.

The agents testified that they later saw the suspect on the Mexican side of the border and thought he had not been hit, so they did not file a report on the matter.

The suspect later filed a complaint against the USBP and both agents. The agents finally filed false reports on the matter and lied to their supervisors. They also altered the scene of the shooting and picked up their cartridge cases, to cover up the incident.

Upon the disclosure of the deception by the agents, an investigation was conducted. They were taken to trial on a number of charges, including causing serious bodily injury, assault with a deadly weapon, discharge of a firearm in relation to a crime of violence, evidence tampering, and a civil rights violation. Ramos was sentenced to 11 years in prison and Compean to 12.

It is rather tragic that the situation played out the way it did. Had the two agents simply stuck with a very plausible, and likely essentially true, story, the result would probably have been entirely different: Agents in the discharge of their sworn duties, detected illegal activity. They stopped a suspect and found him smuggling near-800 pounds of marihuana. He ran away from custody, and could arguably have been armed -- smugglers so often ARE heavily armed. A shot was fired and the second agent fired, in apparent defense of the first. The suspect escaped to Mexico and the agents chose not to pursue him. The van was impounded, the evidence marked and turned in, and a routine report filed. It later developing that the smuggler HAD been wounded would have made small difference. Exchanges of gunfire along the border are traditionally treated in a casual manner, unless there is notable bloodshed.

The Agents were likely “out of policy” in firing on a suspect not KNOWN to be armed or posing a threat to the agents. BUT - - they had interrupted a smuggling operation, and a person under arrest was fleeing. OF COURSE they shot at him. A certain quantity of contraband and the transport vehicle were seized, but the smuggler escaped. Another day on the Rio. If Patrol Supervisors HAD chosen to make a follow up investigation, you’d think that the agents would cooperate and apologize for their poor marksmanship.

Instead, the agents chose to lie about the matter. They engaged in a fairly elaborate cover-up, altering the scene, destroying evidence, and falsifying official reports. They showed clear guilt in so doing.

During the prosecution of the case, the smuggler Osvaldo Aldrete Davila was given permission to enter the United States to testify and was granted limited immunity for his cooperation. He was later arrested on additional smuggling charges and is pending trial on them. It remains to be seen if this prosecution will be carried forward.

In a 2007 CNN interview, Ignacio Ramos apparently contests much of the testimony given at trial. It is difficult at this late date to tell exactly how much of his own testimony this now contradicts.

For whatever the worth of my personal opinion, I strongly believe that President Bush did exactly the proper thing. After examination of all aspects of the matter, he chose to grant Compean and Ramos, not full pardons, but a significant commutation of their sentences. Both men are now due for release on 20 March 2009, completing two year sentences. The sentences are far more merciful than the earlier 11- and 12-year terms. The men will remain convicted felons and will never again hold law enforcement employment.

It pains me to publicly disagree with several individuals for whom I hold high respect, some of them personal friends . Some of them have expressed opinions which are entirely sympathetic toward the convicted BP Agents, and others not so strongly. I must respect the rights of others to their own opinions. I trust that forthright individuals will always be able to honestly disagree without harming their relationships.

Marko probably wrote the best and most encompassing blog entry I’ve seen on this matter. He hits pretty strongly on the “justice for all” aspect of it.

I’m well aware of the frustration of many peace officers who see some notorious evildoers “beat the rap,” time and again. I’ve heard all too many rants by cops who fantasize about “dishing out a little street justice.” - - Ranging from administering a savage beating right on down to cold-blooded murder. “Hey, so you spoil the court case? Hell, he’s probably gonna get off anyway.”

It may be a great temptation for those out on the pointy end of any conflict to take some actions that do not precisely comport with the intent of their bosses. Sometimes, these actions may simply circumvent official policies, while remaining within the strict confines of the law. Other times, some otherwise well-meaning troops are ready to cross right over “the line,” on the theory that the end justifies the means. There is no doubt that the smuggler Aldrete Davila would not have subsequently committed additional crimes, had the marksmanship of Ramos and Compean been better. Choices are made by officers right on the spot, in light of the information at hand, the conditions then obtaining, and the officers’ own viewpoints and values.

Decisions are made, depending upon the given fact situations. Several times in my career, I went in search of certain criminals with the full intent to kill them, given certain legal justification. It never actually came to that. Sometimes they surrendered immediately upon confrontation. Other times, I was not present when they were apprehended. Had push ever come to shove, though, I knew that I would report and testify with complete candor and truthfulness. A peace officer with accepted credibility and a clear conscience will usually be successful in the long run. Yes, there are different types of “spin” that may be put on a given situation, each arguably as true as the other. It is an entirely different thing to file false reports, to lie under oath, and to alter physical evidence. There is, purely and simply, a true difference between being a zealous cop and becoming a criminal oneself.

One of my biggest concerns is when public policy puts first responders into harms way, and then blames them when things go south. There's a whole lot of the "war on drugs" that is costing lives, both civilian and LEOs. This is a (fortunately non lethal) example.

I've said essentially the same as you, JPG, on other sites on the Web. There was a standing policy and procedure to follow. All they had to do was to follow it.

They didn't and that fact seems to indicate guilt. Most likely we still don't know exactly what happened. Whatever it was is not immaterial.

I do think the sentences were out of porportion to the convictions, one-to-five would have been more appropriate, IMO.

It has been noted that the commutations will allow further judicial appeal, with the possibility of overturning the original sentences. I agree whole-heartedly with your position. However, I would not be offended if their appeals resulted in exoneration. I don't think they could be credible law enforcement officers in the future, but I also think that after all that has happened, justice would still be served even if the official record was wiped clean.

I would like to know what motivated the officers to lie about the incident. Was it that they had done something else that was wrong or that their superiors were zero-tolerance on something they'd done?

On the other hand, what we do see is a trend to order certain behaviors by military and law enforcement personnel and then prosecute them for those actions if those actions are deemed to be inpolitic.

Well said JPG. Bottom line, they committed felonys by their actions and were prosecuted for that. The rest of the hoopla merely excabarated and muddled the situation.

Bat crap. Those two should have learned long ago the cover-up will screw you blind. If you screw up, sack up. Tellin' the truth would have ensured no one ever heard of any of them. Instead, the open-border types have fresh ammo.

I'm extremely impressed along with your writing abilities as neatly as with the format to your weblog. Is this a paid topic or did you modify it your self? Anyway stay up the nice quality writing, it is uncommon to look a nice blog like this one these days..

Feel free to surf to my web blog http://www.steveblisslaw.com

You actually make it seem so easy with your presentation but I in finding this matter to be really something which I think I would by
no means understand. It kind of feels too complicated and very broad for me.

I am taking a look ahead in your subsequent submit, I will attempt
to get the hold of it!

I always emailed this web site post page to all my contacts, since if like to read it
after that my links will too.

Take a look at my homepage - human papillomavirus treatment